Being one of the top schools in Indonesia, BINUS International School Simprug supports its students with international standard facilities that will help them in discovering their true potential. In order to make the parents to be familiar with the qualities that it offers, BINUS International School Simprug decided to create a video profile to introduce the parents with the standard that they have. BINUS Creates, as an experienced institution, was entrusted to run the project. In this project, BINUS Creates worked with the experts from the School of Design of BINUS University, who are Mr. Gregorius Barry Carvey Widjaja, S.Sn, Mr. Satrya Mahardhika, S.T., M.Mult and Mr. Ahmad Faisal Choiril Anam Fathoni, S.Sn.

The concept of the video was to promote BINUS International School Simprug as one of the few schools that is supported with the most modern and best facilities combined with world-renowned International Baccalaureate (IB) Programmes, which are Primary Years Programme (PYP), Middle Years Programme (MYP) and Diploma Programme (DP). Most of the schools in Indonesia have not implemented IB Programmes and only teach the students to become passive learners. On the other hand, IB Programmes are designed to encourage the students to become active and enthusiastic, where two-way communication happens. 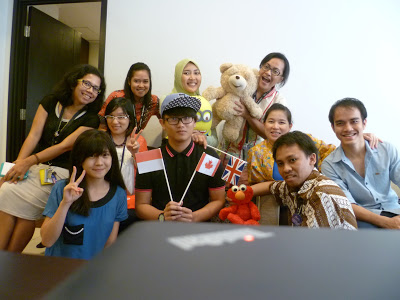